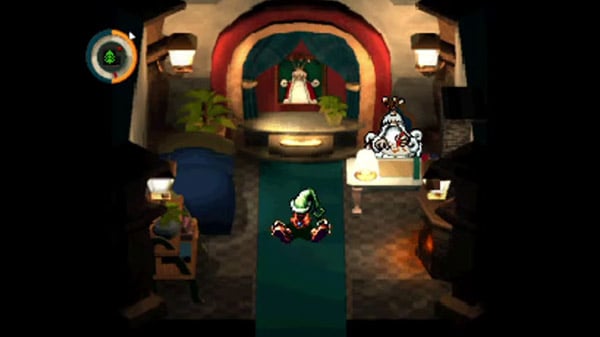 Moon will launch for Switch via the Nintendo eShop on August 27 in the west, developer Onion Games announced.

The Switch version of Moon first launched via the Nintendo eShop in October 2019 in Japan. A physical edition is due out on October 15. Moon originally launched for PlayStation in October 1997.

Here is an overview of the game, via Onion Games:

In 1997, the now legendary anti-RPG Moon launched in Japan. Now, revived by a team of its original creators, find out why it became an instant cult-classic, as Moon comes to the Nintendo Switch—in English, for the first time ever!

Have you ever played an RPG and wondered…

Moon is a game about turning those tropes upside down, and seeing what really happens behind the scenes of your favorite RPG video games.

One night, under the silvery light of a full moon, a young boy is suddenly sucked through his TV and into a videogame—a classic JRPG called “Moon World.” Following closely behind the game’s brave hero, the boy begins his own journey to recover the world’s missing moonlight by collecting “Love.”

As Moon World’s hero loots and levels up by cutting down monsters for experience points—you know, as heroes do—the boy releases their souls and collects their “Love.” Moon is not a game where you fight to level up—your own progress comes by gathering lost “Love”!

As you explore the world, you’ll meet a crazy cast of weird and wonderful NPCs. Observe their strange habits and daily routines by visiting them at different times and days of the week, and learn their secrets to uncover even more lost “Love”!

Watch a new trailer below.

Comments are welcome and encouraged on Gematsu. However, we ask that you follow a simple set of guidelines:

Gematsu reserves the right to edit or delete any comments without notice. This comment policy is subject to change at any time.